This product is no longer available, please Contact Us for replacement solution.

The Nexsan NST2000 is a modern hybrid storage appliance, a more efficient, agile and intelligent alternative to traditional storage arrays, filers, and all-flash arrays. Organizations have different needs for performance, capacity and connectivity when managing and protecting the data that drives your business. The NST2000 blends solid-state technology, a scalable back-end storage infrastructure, multiple NAS/iSCSI/FC front-end connections, and enterprise-class data management services in a single system. It gives you the convenience and control to meet the needs of one or more workloads in one dedicated easy-to-use appliance.

For organizations struggling to meet both high performance and high capacity NAS, FC or iSCSI application requirements, the NST2000 makes that easy with a hybrid of solid-state accelerated hard drives. For applications with the most stringent workload requirements like server virtualization, desktop virtualization (VDI), databases and cloud computing, the NST2000 delivers unparalleled performance to ensure application demands never outpace available I/O again. Your applications will have never performed faster on a system operating at the economics of spinning disk storage.

The proprietary FASTier caching acceleration technology uses solid-state memory, including SSD, to optimize block and file operations in a fault tolerant architecture. FASTier can scale from 600GB to 2TB. Intelligent, automatic caching algorithms remove the need for manual intervention or applicationspecific tuning. Whereas traditional disk storage is hard pressed to meet high I/O requirements and SSD-only arrays have a very high cost with limited capacity, Imation’s NST2000 Hybrid Storage Appliance realigns the trade-off between performance, capacity and cost so IT administrators can do more than ever before.

The NST2000 is fully featured with snapshots, replication, thin provisioning, replication, compression, and much more. A revolutionary GUI and scriptable CLI streamline setup and management for the time-constrained IT administrator. As with all storage, the Nexsan NST2000 no single point-of-failure architecture ensures the ultimate in reliability. The net of all this performance and functionality is a true enterprise-class solution without the enterprise-class price.

The NST2000 provides CIFS and NFS shared folders as well as fibre channel or iSCSI volumes. Snapshots do not require the pre-reservation of storage capacity, and they may be scheduled and managed easily from the management GUI or initiated from Windows VSS requestors.

Individual shares, LUNs, or entire storage pools may be replicated asynchronously to a second NST2000 storage system, with snapshots intact for use on the target side for backups, testing or data mining. Active Directory integration make it easy to manage user identities and access rights on the NST2000 shares, while CHAP, iSNS and LUN masking protect iSCSI traffic. Quotas limit storage consumption by share, and oversubscription is permitted for thin provisioning storage, along with alarms which notify when additional storage is needed. Capacity can be expanded by adding additional storage to a running system, so future needs can be met without incurring downtime. Moreover, link aggregation combines Ethernet ports for faster throughput. 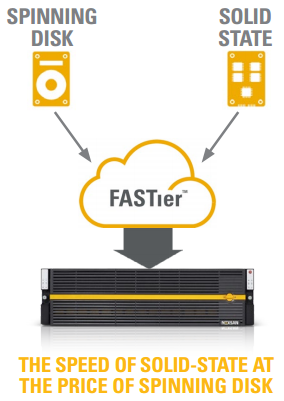 Nexsan’s FASTier acceleration technology leverages the power of solid-state to accelerate the performance of the underlying spinning disks by a factor of up to 10X. The net result is a radical new cost-per-I/O, allowing organizations to do more than ever before in virtual and cloud environments.

The onset of virtualized environments and cloud-based computing has caused traditional disk-based storage to struggle in keeping pace with the new I/O pressures being placed on it. As the number of virtual machines grow, even the fastest traditional storage with the most powerful controllers are simply not fast enough to scale with the seemingly endless performance demands of a sprawling environment of virtual servers and desktops, mission-critical databases and email servers. The result has been a storage performance bottleneck that keeps companies from fully leveraging the true application power and cost-effectiveness of their virtual and cloud infrastructures.

Solid-state performance alleviates storage performance choke-points... but at a price and capacity that is unreasonable for the average organization. In the rush to exploit an emerging marketing opportunity made possible by SSDs, some vendors are providing SSD-only arrays. However, the exorbitant cost and capacity constraints of an SSD-only array have relegated its use to extreme situations. Some vendors have introduced SSDs into their systems with automated tiering software in which data can be migrated from SSD to SAS and/or SATA drives. However, this operation can significantly reduce the performance of the system as data is moved from one tier to another. Auto-tiering presents additional problems as organizations must purchase an inordinate amount of SSD to store their most frequently accessed data because they are housing data rather than caching data. Once data is moved out of the SSDs, it is subject to the slower speed of the spinning disks.

Nexsan’s FASTier acceleration technology has innovatively combined the performance of solid-state with the capacity and cost effectiveness of traditional disk storage. Imagine a Hybrid Storage system as an orchestra. If rotating media is the percussion section and solid-state is the brass section, FASTier is the conductor that makes them work together in harmony to provide the music - a Hybrid Storage system that delivers the speed of solid-state along with the capacity and cost benefits of spinning disk. FASTier’s advanced software architecture and algorithms manage the data that is being read and written, leveraging a modest amount of solid-state to greatly accelerate the performance of the underlying spinning disks by a factor of up to 10X or more.

In this scenario, solid-state is judiciously used to enhance traditional disk-based storage via FASTier to provide new levels of performance where cost and capacity are primary concerns. As a result, a Hybrid Storage system (like Nexsan NST4000) easily eliminates the performance bottlenecks in the most demanding virtual and cloud environments.

This technical brief will survey the landscape of flash-based caching approaches, identifying their strengths and weaknesses, and explore Nexsan FASTier in the Nexsan NST Hybrid Storage system.

Caching techniques are not new to storage systems or application servers. Reads and writes are typically held in high-speed DRAM providing needed acceleration for the underlying hard drives. Frequently requested blocks can be read from the spinning disks and held for a period of time. Smaller writes are also held in DRAM where they are aggregated into larger writes and RAID checksum calculations can be performed before they are pushed to the spinning disks.

FASTier acceleration technology in the NST storage system utilizes up to 192GB of DRAM and up to 2.8TB of 100GB or 200GB flash-based SLC SSDs. The NST is a Hybrid Storage system that contains up to a petabyte of spinning disk storage. FASTier is ideal with that kind of capacity as it accelerates overall storage performance by up to 10X. If the working sets of the application servers fit entirely into the SSD cache, performance can climb even more dramatically. 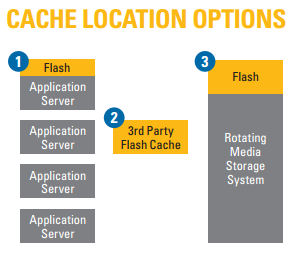 When cache is introduced in the application server itself, it lives on the high speed PCIe bus for maximum bandwidth. Still, since it is a cache, the speeds at which it can be filled and drained must be balanced, lest it remains unfilled, or becomes completely filled. So, bandwidth to the storage system has to be considered. Multiple 8Gb Fibre Channel, 10Gb iSCSI, 24Gb SASx4, or 40Gb Infiniband interconnects may still be needed.

There are four disadvantages to application server-based caching: 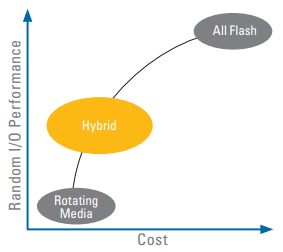 When storage systems cannot be outfitted with a sufficiently sized cache, a third system can be introduced in between the application servers and the storage system. This is the least beneficial architecture of all, and usually the most expensive.

There are four disadvantages to interstitial appliance-based caching:

There are five advantages to storage system caching with FASTier:

Rather than use flash-based devices as a cache for spinning disks, some storage systems are flash-only. While the performance numbers are high for such systems because the entire working set fits into flash, the costs are exorbitant while the capacities are extremely low, typically under 50TBs as compared to Hybrid Storage systems that leverage spinning disks to hold up to 1PB or more. What’s more, flash-based SSDs have a much shorter lifespan compared to spinning disks. And when they are configured into a RAID set, the SSDs may experience two writes for every application write – one to store the data, and one to store the RAID5 or RAID6 checksum, further decreasing the lifespan of the SSDs. 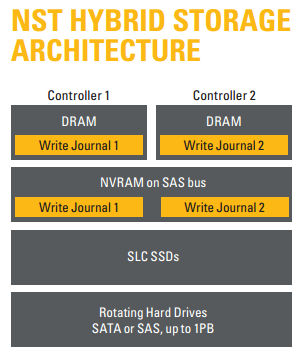 Not all hardware architectures are alike for flash-based caches. Some are not resilient against a single point-of-failure. Therefore, they can only be used as a write-through cache where reads can be cached but writes experience long delays as they are committed to the spinning disks before being acknowledged. FASTier is fully fault-tolerant. It can cache both reads and writes for maximum application performance acceleration.

FASTier uses DRAM, NVRAM and flash caching to greatly accelerate reads and writes in concert with the underlying spinning disks. DRAM and NVRAM are important parts of the hardware architecture because they are 20X or more the speed of flash and they do not wear out. FASTier uses flash for both read and write caching. In write caching, the transactions are protected in the DRAM/NVRAMbased write journals until they make it all the way to the spinning disk RAID set, so the flash devices do not need to be in a RAID set. Further, the read cache flash does not need to be configured into RAID sets. Should a read cache flash device fail, it is mapped out and the read is re-issued to the underlying spinning disk. NST Hybrid Storage minimizes the wear on flash-based devices by clever use of DRAM, NVRAM to prolong the overall life of the system.

The key to FASTier is the software architecture and algorithms that intelligently and automatically use solid-state devices to accelerate the performance of the underlying drives. The FASTier write journal uses the same technique that has been used in large enterprise-class databases such as Oracle, DB2, or Microsoft SQL Server, where writes to the database come in as transactions, are placed into the write journal immediately, then acknowledged to the writer. Later, they are picked up from the write journal and applied to the underlying hard drives. This same technique is used in journaled files systems such as Microsoft’s NTFS and Apple’s HFS Plus journaled file system. Another FASTier algorithm uses DRAM to aggregate smaller writes before sending them to the underlying spinning disks, which increases the ability of the spinning disks to absorb the data efficiently. Opportunistic read-aheads of blocks for applications exhibiting proximate read access patterns also increase system performance. And holding transactions in the write journal until they make it all the way to the underlying drives increases cache performance and minimizes flash wear.

FASTier management is performed within the GUI of the NST storage system. The only decisions are the size of the FASTier read and write caches, the number of FASTier caches per system, and the storage pools that each FASTier cache will be associated with. This level of simplicity is in stark contrast to the complexity of caching features on competing storage systems, server-based caches, or third-party appliance-based caches that live between the application servers and the storage system.

Nexsan’s FASTier acceleration technology utilizes solid-state devices and spinning disks to create a Hybrid Storage system which breaks through the barriers of traditional spinning disk storage. The resulting performance, cost and capacity benefits are far beyond alternative caching architectures and flash-only storage systems. FASTier changes everything. A FASTier enhanced Hybrid Storage system, such as the NST with 7200RPM SATA or NL-SAS drives, can deliver the performance of a system with 15K SAS drives, at one third the cost and in one third the footprint, while using one third the power and cooling. And because FASTier on the NST can be configured up to 2.8TB, it can hold entire working sets to deliver up to 10X the performance of spinning disks and beyond. Alternatively, an NST Hybrid Storage system outfitted with SAS drives and FASTier delivers industry-leading performance and price-per-IOP to power the most demanding virtual computing environments and databases. 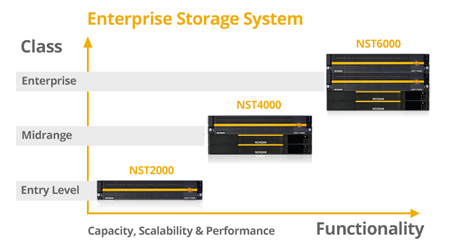